Close up of a crate filled with milkfish
Photographer: Lilly Agustina/Act For Farmed Animals/We Animals Media

An investigation, conducted by Act For Farmed Animals and We Animals Media, reveals how tilapia, catfish, and milkfish are farmed, killed, and sold in Indonesia. For the first time, the horrors of a fish farm, previously behind closed doors, have been published for all to see.

The results are truly shocking.

The authors demand producers and retailers improve the treatment of these fish. Their argument stems from the biology and nature of fish, who are sensitive, intelligent animals with complex behaviours. These include the ability to learn from each other, recognise one other, remember solutions to problems, and employ tools.

Yet, despite these thought-provoking justifications against their shocking treatment, the investigators claim they witnessed obscenely cruel treatment and a lack of humanity in the fish farming process. As the authors express; “our exposé shows unsanitary conditions, with fish visibly sick and dying prematurely, left to float in their pens once dead, live fish transported on ice – a practice decried by animal welfare specialists, fish fully conscious at local markets and farms and alarming environmental impacts to surrounding areas. We are inviting Indonesian consumers to help change this reality. We must be more aware of how detrimental to sanitation, the environment and animal welfare the current practice of farming fish is, and take concrete action to solve these issues.”

The fish harvest takes place at night: Unseen by most eyes, under the radar.

The investigators documented “milkfish living in visibly dirty water with low oxygen levels. Some fish were suffering from exhaustion, sickness, and premature death, while others showed signs of disease from poor sanitation and dead fish were left floating in pens. The process requires farmworkers to manually net and remove the fish from ponds once they have reached market size (20–40 centimetres in length). To capture the milkfish, workers gradually enclose them by pulling a net across each pond until they cannot escape. This process is chaotic and workers wear protective helmets to avoid injury from the jumping and thrashing fish attempting to flee from the capture. On one farm, an estimated 3.5 metric tons of milkfish from just one pond were confined in nets, and our investigators observed fish dying during the process.” 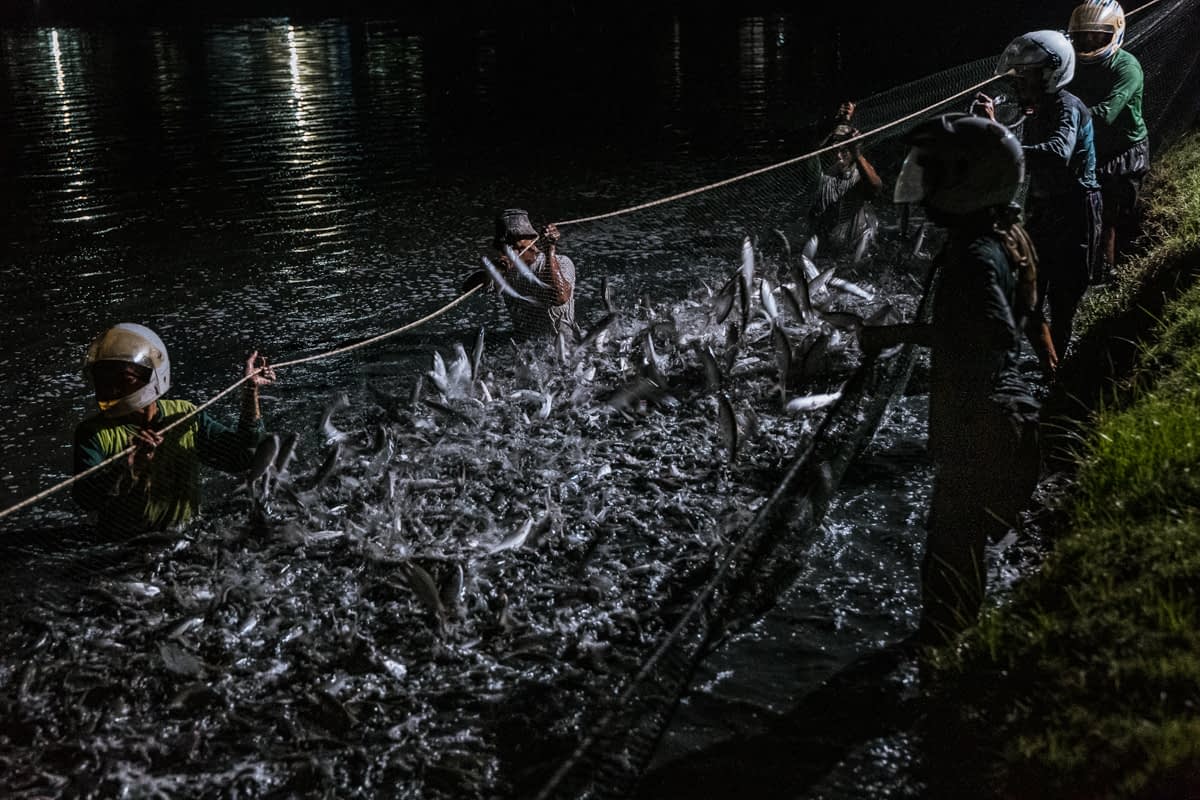 The slaughterhouse is, as one would imagine, just as frightening a sight.

The investigators witnessed, in a fish slaughterhouse in the Central Java region, “tilapia, catfish, and gourami being unloaded with dip nets and transferred to smallholding ponds containing dark and dirty water. The slaughterhouse workers chose each fish for slaughter with their bare hands. Rejected fish were thrown back into the ponds, and selected animals were put into plastic baskets that contained no water.”

No slaughterhouse is exempt from cruelty but in this particular case, the treatment of fish is unnecessarily horrific. The authors are hopeful that their uncovering will evoke social reaction and this, in turn, can call for legal action. Undoubtedly, no one wishes to think of a slaughterhouse, but it seems this picture may be a necessary tool to encourage an outcry that can harness change. 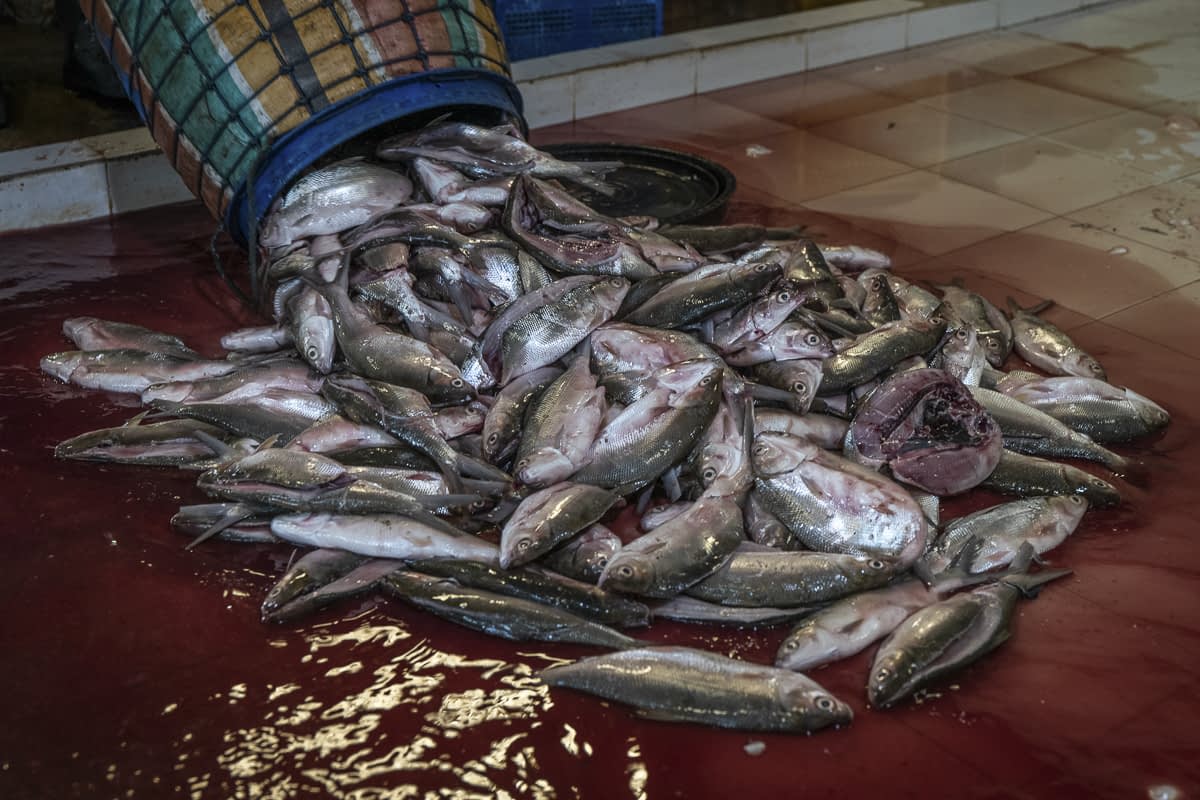 Dead milkfish spill out of a transport barrel in a warehouse in Indonesia
Photographer: Lilly Agustina/Act For Farmed Animals/We Animals Media

Fish are transported to the market stalls on ice, but the investigators argue that “ice is not considered a slaughter or stunning method, but many fish die from lack of oxygen on route, while still conscious. Scientific studies have concluded that ice causes thermal shock, and it is a painful and stressful process that keeps fish conscious and sensitive to pain for prolonged periods.”

At the markets themselves, numerous alarming activities were witnessed by the team. From crowded tanks of live fish to the skinning of live fish, the nature of the markets was highly distressing for the fish and highly disturbing to the observers. 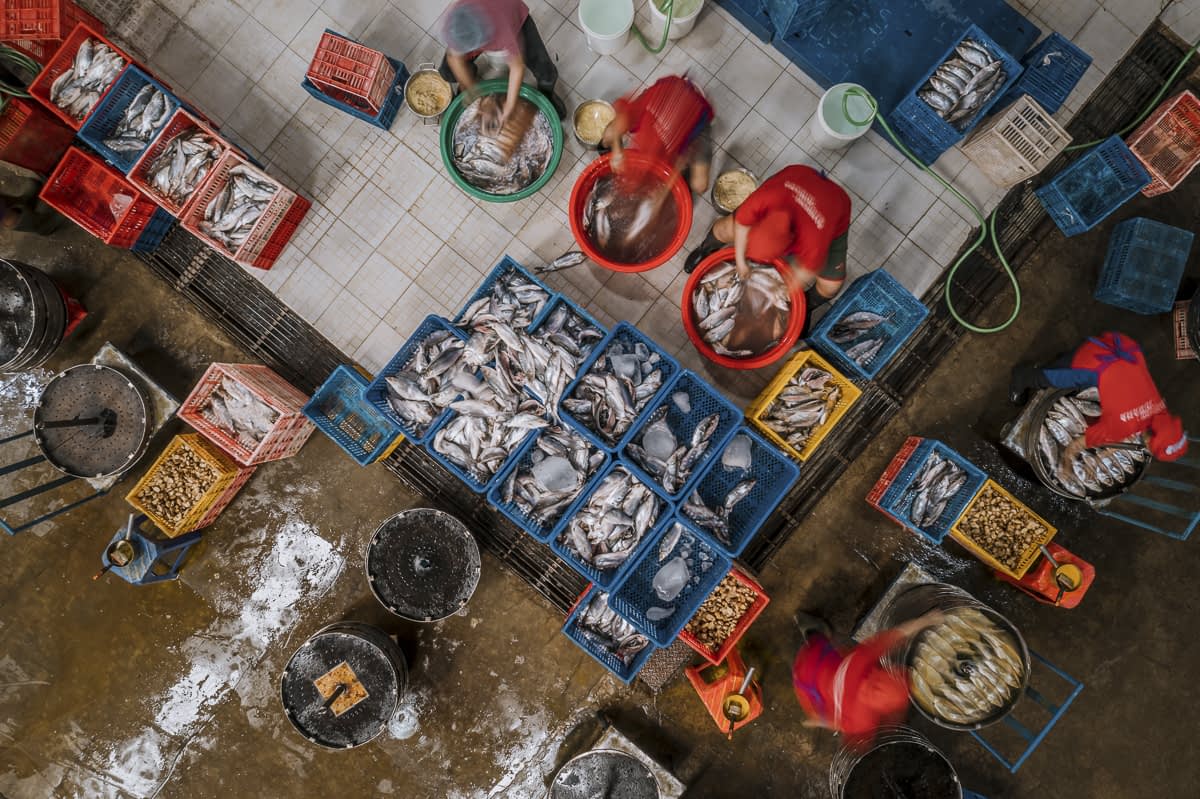 Direct overhead view of workers inside an Indonesian milkfish processing facility, seasoning, and sorting milkfish into plastic crates before the fish are steam cooked at the facility
Photographer: Lilly Agustina/Act For Farmed Animals/We Animals Media

Act For Farmed Animals and We Animals Media also comment on past cases where the environment has been impacted by the nature of fish farming. It is not just of concern to the welfare of the fish but of concern to us all with much greater and further-reaching implications for local ecosystems to expansive underwater networks.

The investigators note that in “August 2018, at Kedung Ombo Reservoir, over 100 tons of farmed tilapia died. Experts say the large number of floating nets in the dam and the quantity of food given to fish has led to a rise in bacteria, toxins and water pollution. This problem is an ongoing issue, with instances of farmed fish found dead a common occurrence.”

In this particular case, in Indonesian fish farms, the investigators reveal “at every step of the process we documented poor animal welfare conditions, some of which would be agonising for the fish. This, in tandem with environmental pollution, creates a strong case for change.” 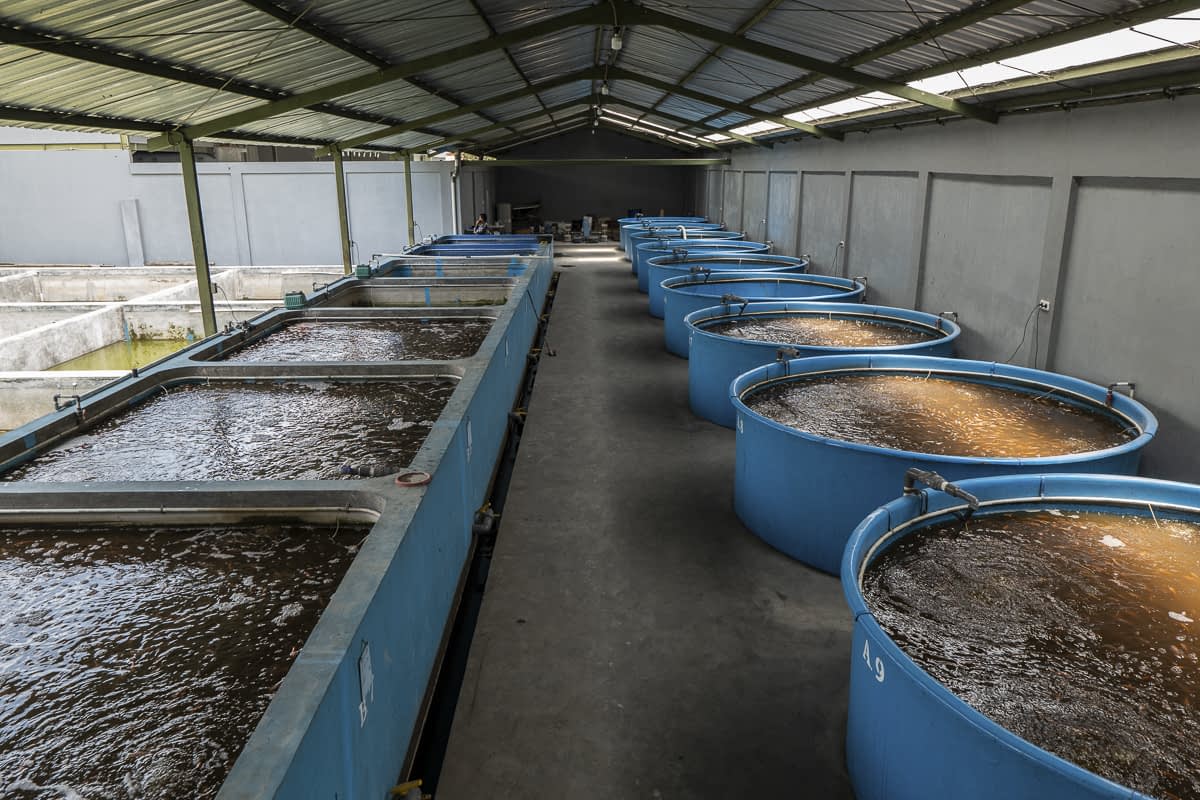 Rows of fibreglass tanks and cement ponds house thousands of live tilapia at a warehouse in Indonesia. The fish will remain here until transported to supermarkets
Photographer: Lilly Agustina/Act For Farmed Animals/We Animals Media